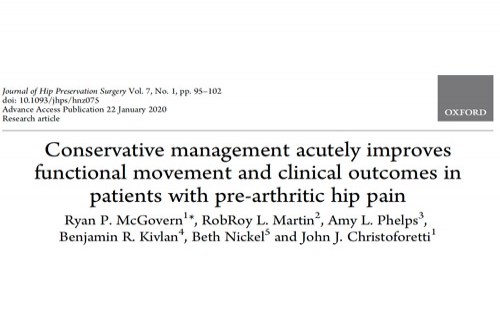 The functional tests used by the authors in this study are based on previously published research by many of the same authors. Prior to their publication there was no evidence in the literature of the validity or reliability of these tests for use in patients with hip dysfunction. As part of the validity assessment in this referenced study inter-related reliability was compared between a physiotherapist and a surgeon.

The 12 exercises are available in the previously reviewed reference paper which is a useful guide.

A major methodological shortfall of this study was that there was no use of biomarkers to permit more objective measures of pelvic or trunk abnormalities and motion patterns. Rather the assessors were reliant on a physiotherapist ability to subjectively observe, grade and control for this. It must be acknowledged that this shortfall may be due to the retrospective design of this study, despite generalised data being collected prospectively as part of routine clinical care for patients with pre-arthritic hip pain.

The power test the authors used in this study are actually designed for 21 cases in each group, however in their non-improved group they only managed to include 16 (SLST) and 15 (SDT). This is an obvious limitation which was not highlighted in the study, and may have an impact on the reported results.

The follow-up duration was considered to be very short – minimum 4 weeks , with an overall average of 8 weeks. A longer term follow up has the potential to greatly impact the overall conclusion of this study, particularly in terms of the potential crossover to surgery due to recurrent symptoms upon return to full activity in these patients.

It was also considered that there was a large number of individual components included in the conservative therapy programme, any one of which could be potentially effective in isolation – in addition to physiotherapy and a home-based programme also included was activity modification, limitation of aggravating factors and patient education and in this study there is no breakdown as to what maybe had the biggest effect. The avoidance of aggravating factors or altering activity or sports may have been more effective in improving outcomes rather than any physiotherapy treatment employed.

The conservative management programme was not well-controlled or regulated, with multiple rehabilitation specialists involved in the treatment of the patients with varying levels of experience and acknowledgement that many differing exercises patterns were incorporated in the home-exercise programme and supplementary therapies during the weekly physiotherapist-led day.

Moreover there is no reference within the results to the level of compliance to the physiotherapy programme adhered to by the patients. Compliance may have been an additional associated variable (and indeed a limitation) which could affect the overall outcome. Particularly as this is a conservative management study, compliance should be acknowledged as a major influencing factor in the assessment of this treatment intervention.

From a methodological point, more weight to this study could have been achieved if there was a comparative groups who did not receive any physiotherapy intervention and then to assess any changes in SLST and SDT over time between these groups. This could have substantiated any true benefits of a proactive conservative management approach for patients with pre-arthritic hip pain.

Despite the authors highlighting in the materials and methods section that patient-reported outcome measures were collected for each patient at the initial and follow-up clinical evaluation, the actual baseline and post-intervention overall scores were not reported in the results. Rather mean change with associated p-value is only reported. It is difficult therefore to interpret the clinical impact of this treatment on outcomes for a patient. For example, looking at Table II > SLST > HOS-ADL, among those who improved there is a reported change in score of 9.7, which is later referred to as a “clinically meaningful change” within the discussion. A change in score of 9.7 would have a very different clinical impact for patients who had a baseline score at opposite ends of the HOS-ADL spectrum.

Furthermore, in order to compare the effectiveness of this treatment with alternative literature/interventions the follow-up PRO score would have been more useful for the reader.

As reported by the authors the main finding was that the majority of patients referred for conservative management were able to improve their functional movement control over an average 8-week time frame. The authors also conclude that this study demonstrates the potential benefit of physical therapy and home-exercise programme to acutely improve patient clinical outcomes measures, however it has not been clarified that it was specifically the physical therapy that made the difference. Additionally, it has not been clarified whether it may be more likely that this intervention would work with a patient presenting with dysplasia or FAI or some other structural instability which made up the entire cohort reported on. The type of muscle imbalance a dysplastic patient would present with would be very different to a patient who has say over-covered impingement.

It cannot be concluded from this paper that the physiotherapy intervention resulted in improvements in functional movement nor in clinical outcome for patients with pre-arthritic hip pain.