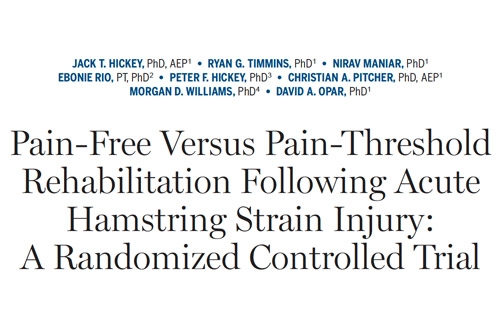 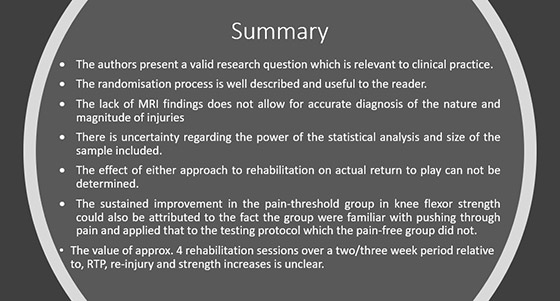 The title focuses on an important research question which has substantial clinical relevance.

The main aims are clearly set out in the introduction and based on a prior published systematic review by the research team: 1) to identify whether a pain-threshold approach to rehabilitation of a hamstring strain injury (HSI) differs from a pain-free approach with respect to return to play clearance (RTP) timeand 2) to determine whether adopting a pain-threshold approach to rehab can improve measures of knew flexor strength, bicep femoris long head (BFLH) fascicle length, fear of movement and re-injury rates.

The authors present a comprehensive methodology. The Cochrane risk of bias tool was used to guide practice and as sucha clear and detailed randomisation process was described in the paper. The blinding of assessors was also highlighted throughout, although it is not fully clear whether the lead physiotherapist/lead author who supervised patients and determined RTPclearance was blinded to group allocation.

A priori power analysis was conducted to determine sample size. The size of the effect included in the analysis was large (1.2) which was based on two prior randomised control trials comparing rehabilitation which emphasised lengthening compared to conventional exercises. The authors state they required 29 participants, but it is not clear whether this was 29 participants in total or whether this allowed for two groups within the entire sample for comparison. There are questions therefore regarding the overall power of the study.

Participants were invited to join the study if they had a suspected HSI which was later confirmed in clinic by clinicians who were blinded to the group allocation. MRI was not used to diagnose the HSI, the lack of which is rightly highlighted by the authors as a limitation of the methodology. The absence of MRI does not allow for differentiation between the nature andseverity of injury which will undoubtedly have an influence on the rehabilitation process and return to play.

BFLH fascicle length was determined using ultrasound by a clinician blinded to group allocation. Fear of movement was determined by the lead author using the 17 item Tampa scale of Kinesiophobia.

It would have been useful to the reader for the authors to include results from any statistical analysis between baseline characteristics of the groups in table 4. Again, the lack of MRI findings is a limitation here as there is no opportunity to classify injury types and severity within the rehabilitation approaches for comparison. Considering one participant achieved RTP clearance after 6 days there are questions as to the severity of the injuries to begin with. It cannot be concluded therefore that a pain-threshold approach would apply to all HSI.

Table 3 which details the return to play clearance criteria needed to be expanded upon. It was not stated whether the lack of pain or apprehension during sprinting was only for linear running. Whether this translates to multidirectional field sports is unclear. Kicking was also not assessed.

It was not stated why the participants were followed up for six months only and not a full season following the injury. While no statistical analysis was possible for the re-injury rates, it appears as though those in the pain-threshold group had a shorter re-injury time. With a longer follow up and greater numbers, analysing this aspect would be extremely useful to health care professionals.

The results indicate that delaying progression through a rehabilitation program until pain free movement in each phase is achieved may not be necessary. The limitations in methodology including the short intervention time and small sample size compromises the validity of the conclusions made regarding strength improvements over time.