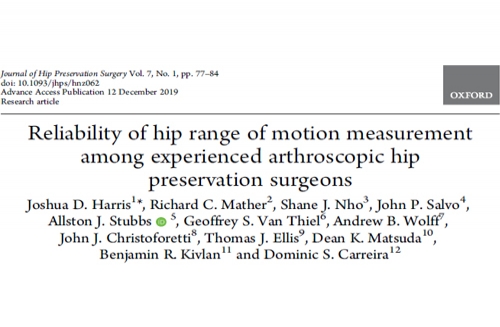 The introduction adequately highlights the importance of objective ROM assessment in the overall evaluation of arthritic and non-arthritic hip pain.

The purpose of the investigation is clearly defined: To assess the reliability of ROM measurement among experienced hip arthroscopy surgeons and to determine the magnitude of hip flexion change with posterior pelvic tilt.

The relevance of this study is valid, and an important concept to report on, as there is a stark lack of up-to-date normative ROM data within the ever-expansive hip arthroscopy literature available.

However, there are a number of significant limitations to this study.

This was a small sample study – only 5 participants recruited. The authors do report using power analysis as a basis to support the fact that 5 participants were enough to look at inter-observer reliability. However, the statistical power analysis performed to determine sample size only relates to the pelvic tilt aspect of ROM measurement – i.e. how many participants would be needed to show a 15-degree difference of hip flexion with posterior pelvic tilt from hip flexion with contralateral hip extended, which is a large difference in what is essentially two different measurement techniques.

Regarding the measurement techniques utilised: when a hip is being examined and the contralateral hip is maintained in an extended (flat on the floor) position, the pelvis is being stabilised with the hip joint essentially in a neutral position (zero degrees flexion/extension). Once the contralateral hip is brought up into full hyperflexion and the patient is requested to hold the leg back against their chest (which is what is described in the methods section), flexion of the lumbosacral spine occurs making the 180o reference line along the trunk somewhat distorted.

Although the authors correctly suggest bringing the contralateral hip into hyperflexion will induce posterior pelvic tilt, they are incorrect in their understanding that this increases flexion by a mean of 17 degrees. Inducing posterior pelvic tilt will simply move the neutral (measurement) hip into relative extension with respect to the acetabulum (by a mean of 17 degrees in this cohort). Therefore, the reported increase in 17o flexion with this manoeuvre is inaccurate. Rather, the technique changes the arc of flexion from a starting point of neutral (contralateral hip neutral) to a starting point of extension (contralateral hip fully flexed).

It is stated that “Examiners were instructed to perform passive motion assessment as they would in the clinical office setting…”. However, a floor and yoga mat (as opposed to a raised examination table) was used. Additionally, it is unclear as to how often the examiners involved in this study actively incorporate measurements (either using digital photography or through goniometry) into their standard clinical examination practice.

Furthermore, the references of “normative values of hip flexion utilised for this study was 115 +/- 11.5..” are from literature about 40 years old, which further highlights the deficiencies of normative data in this area. Additionally 2 of 3 of these references are specific to male subjects which only relates to 60% of this study’s population.

“All photographs were taken with cellular phone cameras”………”Screen protractor was utilised to perform on-screen motion measurements…” – the two references mentioned here at this point (for digital photography) were utilised on cadavers – it would be useful if references for the use of this tool for measuring was substantiated in live human volunteer studies, although it is acknowledged that the reliability of the actual measuring tool was not under scrutiny in this study.

Unfortunately, the photographs used to showcase the techniques of measuring the different ranges of movement in this study are graphically misleading in their standardisation and do not reflect the guidelines in the text. For example, in Fig 1 (C) & (D), while it appears the volunteer is in the same position on the yoga mat for both movements, and the reference axis describes as being “parallel to the spinal column, straight in the sagittal plane”, the location of this reference line in both images is inconsistent. This may therefore be influencing the measured angle and creating variability between individual surgeon measurements.

The results section is very limited, with an omission of the most important data (actual examiner measurements) which, if included, would provide greater clarity to the reader; without this data it is not possible to know how well the 5 examiners truly agreed (or didn’t agree) with each other in their recorded measurements.

A table of the actual recorded results from each of the 5 examiners to demonstrate the range of variability in measurements between experienced arthroscopic hip surgeons should have been included, particularly considering there was poor reliability for the most relevant two (flexion and Internal rotation) of the 4 measurements; simply providing a mean measurement (as in Table II) is insufficient for a reader to comprehend the variability in actual measured data.

Looking at Table 1 (which summarises previously published studies of hip ROM), almost every study referenced in this table describes and reports on internal rotation (and flexion), however the authors of the current study report this movement to have the poorest reliability. There is therefore a disconnect with this study and the many previously published to date.

The purpose of the study was to assess the reliability of hip ROM among experienced hip arthroscopic surgeons and 4 different ROMs were analysed.

The fact that the most relevant ROM with respect to hip pathology (internal rotation and flexion) showed less reliability is an important point which is missing from the conclusion; the conclusion is therefore biased toward the positive results obtained.

The authors also incorrectly conclude that increasing posterior pelvic tilt somehow increases the true range of hip flexion when in fact changing the pelvic tilt simply places the hip to be measured in a more extended initial position to begin with leading to a false increase in true flexion.

The study was poorly executed with a number of fatal flaws in the methodology; as such the conclusions cannot be supported by the results.